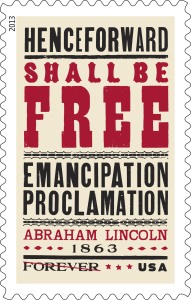 In an effort to cripple the Confederacy, U.S. President Abraham Lincoln issued an executive order on September 22, 1862, proclaiming that the legal status of the 3 million slaves in the rebellious states would be changed from slave to free if the Confederate states did not cease their rebellion by January 1, 1863. The Confederacy did not yield and so, on January 1, 1863, Lincoln issued the Emancipation Proclamation. While the proclamation did not put an immediate end to slavery, it paved the way for the total abolition of slavery in the United States. On December 6, 1865, the 13th Amendment of the Constitution of the United States was passed, an amendment which abolished slavery.

In Luke’s Gospel, Jesus was at the synagogue in Nazareth and, as was His custom, He stood up to read from Scripture. He was handed the scroll of Isaiah, unrolled it and began to read (Luke 4:16-17). The words that Jesus read were His “Emancipation Proclamation.”

The Spirit of the LORD is upon me,
for he has anointed me to bring Good News to the poor.
He has sent me to proclaim that captives will be released,
that the blind will see,
that the oppressed will be set free,
and that the time of the LORD’s favor has come. (Luke 4:18-19, NLT)

Jesus came to set the captives, those who are oppressed, free. But the freedom that Jesus brings is not a physical freedom; it is a spiritual freedom. In John 8, Jesus is speaking to the Jews who had believed Him and tells them that, if they abide in His word, they are true disciples. They will know the truth and that truth will set them free (John 8:31-32). The Jews responded by pointing out that they are children of Abraham and have never been anyone’s slave. They could not understand why Jesus was telling them that they would be set free (John 4:33).

The slavery that Jesus was referring to was not physical slavery. It was spiritual slavery. Jesus answered their question by saying, “I tell you the truth, everyone who sins is a slave of sin (John 8:34).” When we live according to the desires of the flesh, our sinful nature, we are slaves to sin. But, thanks to the grace of God which was shown through Jesus Christ, His Son, we are no longer slaves to sin. Because of Jesus’ death and resurrection, those who believe and follow Him, while turning from sin, are now set free from that sin. As Jesus said in John 8:36, “So if the Son sets you free, you are free indeed.”

← Love Your Neighbor
Our Journey in Christ →