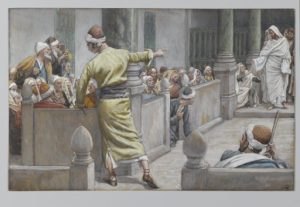 A second time they summoned the man who had been blind. “Give glory to God by telling the truth,” they said. “We know this man is a sinner.” He replied, “Whether He is a sinner or not, I don’t know. One thing I do know. I was blind but now I see!” (John 9:24–25, NIV)

The man had been blind from birth. He lived every day of his life in darkness, unable to do anything but beg for the help and kindness of strangers. But one day, all that changed. It was the day on which the man encountered Jesus Christ. Jesus walked up to the man, spit on the ground, making mud with His saliva. He took the mud, put it on the blind man’s eyes and then told him to go and wash in the Pool of Siloam. The man did as Jesus told him to do and, for the first time in his life, he was able to see (John 9:6-7). He was set free from the prison of darkness by the light of the world.

This healing took place on the Sabbath so, when the Pharisees heard of it, they decided to investigate. They questioned the formerly blind man. They questioned his parents. Then they questioned the man again. They wanted the man to testify that Jesus was a sinner and that the healing was from God, but had nothing to do with Jesus. The man told them that he did not know whether Jesus was a sinner or not. He told them that the one thing he did know beyond a shadow of a doubt was that he had been blind but could now see.

The formerly blind man’s words are echoed in one of the most beloved hymns, “Amazing Grace.”

Amazing grace, how sweet the sound
That saved a wretch like me;
I once was lost, but now I’m found;
Was blind, but now I see.

Don’t you just love that hymn? The words of “Amazing Grace” are such a testimony to the love and grace that God shows to all of us, a love and grace that are demonstrated in the fact that, while we were still sinners, God gave His Son, Jesus, to die for us, so that by believing in Jesus, we can be saved (Romans 5:8; John 3:16).

Jesus came as the light of the world so that everyone who believes in Him will no longer live in the darkness of sin (John 8:12). Without Jesus, we are spiritually blind, walking in the darkness that has been created by our sin. Sin causes us to walk in the darkness, where we stumble and get lost. But when we come to Jesus, when we believe in Him, believe that He died for us, and we turn from our sins to follow Him, then we walk in His light. And, when we walk in His light, that darkness cannot overtake us (John 12:35). Without Jesus, we are lost. With Him, we are found. And when we walk with Jesus, the light of the world, like the blind man we can say, “One thing I do know. I was blind, but now I see.”

One thought on “I Was Blind, But Now I See”