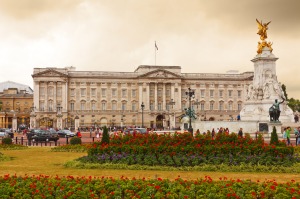 Since 1837, Buckingham Palace in London has been the principal residence of the reigning British Monarch. Queen Victoria was the first to reside there and that tradition has been carried down through the current monarch, Queen Elizabeth II. In addition to being the residence of the monarch, Buckingham Palace has served as the administrative headquarters of the monarch and as the site for state occasions and royal hospitality. The palace contains 775 rooms, which includes staterooms, royal and guest bedrooms, staff bedrooms, offices, and 78 bathrooms. Needless to say, it takes quite a large number of servants to tend to both the building and its inhabitants. In fact, according to Answers.com, there are 800 servants employed in service to the Queen.

Jesus is the Son of God (Mark 1:1). He is King of kings and Lord of lords (Revelation 19:16). He sits at the right hand of God the Father (Acts 2:33-34). But when Jesus came to earth some 2,000 years ago, unlike the British monarchs, or any other earthly rulers for that matter, He did not live in a huge palace with scores of rooms. Jesus Himself said, “Foxes have dens and birds have nests, but the Son of Man has no place to lay His head (Luke 9:58, NLT).” Jesus didn’t have an army of servants ready to cater to His needs and desires. In fact, referring to Himself, Jesus said that, “the Son of Man did not come to be served, but to serve… (Mark 10:45, NASB).” The King of kings, who could have had a legion of servants to wait on Him came to serve by giving His life so that we could be set free from the penalty of sin.

As followers of Jesus, we are called to be like Him. When we give our lives to Him, when we confess and turn from our sin, and follow in His ways, we are not saved just for our own benefit. We are saved to serve. Just as Christ served us, we are to serve Him by serving others. Unlike earthly rulers, who “lord it over their people,” or earthly officials who “flaunt their authority over those under them,” we are called to be servants to those around us (Mark 10:42-44, NLT). We, who have been given freedom from the slavery of our sin are not called to turn that freedom into an opportunity to satisfy our worldly needs and desires. Rather, we are called to “serve one another in love (Galatians 5:13, NLT).”

Jesus commanded that we must love our neighbor as ourselves (Matthew 22:39). One of the best ways we can do that is by serving others, by placing their needs above our own. When we meet the needs of others by serving others, we reflect Jesus in the world.