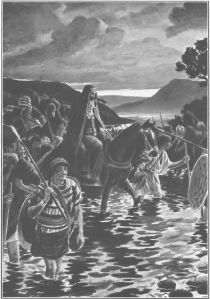 In 2 Samuel 15, we read the story of David fleeing from his son, Absalom, who has taken over the throne. Knowing that his son sought to kill him, David fled with his attendants, crossed the Jordan River, and camped at Mahanaim. Absalom was a handsome, smooth-talking person who knew how to please the people of Israel and steal their hearts. Because of Absalom’s lies, the people had turned against David, and so the numbers of his enemies had increased. The times were very dark for David, and it was in this dark time that David wrote Psalm 3.

Psalm 3 begins with David crying out to the Lord about how great the number of his enemies had become (v. 1). He pointed out that many of the people were saying that David was beyond help (v. 2). They did not believe that God would save David, would not deliver him from his enemies or from the dire situation he was facing. But David knew the God he served. He knew that God was his refuge, his strength, and his very present help in times of trouble (Psalm 46:1). So, in verse 3, David praised God for the fact that God was a shield about him, that God was his glory and it was God who would lift David’s head high, despite the circumstances. Knowing this about his God, David called out to God with the confidence that God would answer (v. 4).

When we are in dark times in our lives, when our circumstances seem hopeless, we should take our cue from David and remember that God is our shield. He covers us with His glory and will lift our heads high above our circumstances when we cry out to Him.

In verse 5, David says something that, from a worldly point of view, makes no sense. Despite that fact that his enemies had increased, despite the fact that his very life was in danger, David says that he laid down and slept. He woke the next morning and had no fear, despite the fact that tens of thousands of people had set themselves against him (v. 6). Why was David able to sleep? Why did he have no fear? Because the Lord, His God, sustained him (v. 5). God gave David the rest that he needed and helped him to see past his circumstances. David knew that God was with him and that God would give him the victory. And so, David slept, just as Peter slept when he was in prison (Acts 12).

When we place our trust in God and seek to do His will, God will give us rest from the things that cause us to be wearied. In Matthew 11:28 (NLT), Jesus said, “Come to me, all of you who are weary and carry heavy burdens, and I will give you rest.” Just as David was confident in God’s ability to sustain him through his trials, so we can be confident as well.

In verses 6 and 7, David asks the Lord to save him. He points out that victory comes from God. David knew that his salvation was from the Lord, and so he had faith that God would go before him and defeat the army of Absalom. And that’s just what God did (2 Samuel 18). When we are facing trials, when darkness seems to surround us and the enemy of our souls is telling us that we are beyond help, that God will not save us, we need to be like David and have faith that God will come through for us. We need to praise God for the victory that we know will come.

God is our shield, He sustains us, and He will save us when we cry out to Him and trust in Him.