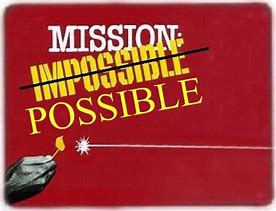 “Good morning, Mr. Phelps. Your mission, Jim, should you decide to accept it…”

The 1960’s/1970’s television series, Mission: Impossible, centered around a group called the Impossible Missions Force (IMF), a team of secret government agents who took on seemingly impossible covert missions against dictators, evil organizations, and crime lords. Most episodes began with Jim Phelps, the leader of the IMF, receiving the team’s assignment via a tape recorder. The voice on the tape would explain the mission, adding that, due to the nature of the mission, any of the IMF team members could be caught or killed and, should that happen, the government would disavow any knowledge of the team’s actions. The recording would then end with the words, “This tape will self-destruct in five seconds.”

As followers of Jesus Christ, we are on a mission. Our mission, given to us by Jesus, is to make disciples of all people, baptizing them in the name of the Father, Son, and Holy Spirit (Matthew 28:19). But, unlike the missions that the IMF faced, our mission is not impossible, but possible. Before ascending into heaven, Jesus made it clear that we would be given the power that we would need to complete our mission. That power would come from the Holy Spirit, and it would give us the ability to be witnesses for Jesus in our homes, in our neighborhoods, in our cities and countries, and around the world (Acts 1:8).

In our Mission: Possible, we are called to make disciples, to bring others into a life-changing relationship with our Lord Jesus Christ, teaching them all that Jesus taught His disciples (Matthew 28:19-20). We are called to proclaim the kingdom of God, which came to earth through the incarnation of His Son, Jesus (Luke 9:2). We are called to proclaim the Good News of Jesus Christ, which we call the Gospel (Acts 20:24), bearing witness to all that we have seen or heard about Jesus (Acts 5:30-32). And we are called to bring honor to God as we show we are Jesus’ disciples by bearing fruit for His kingdom (John 15:8).

Our mission, should we choose to accept it, is to become Christ’s ambassadors in every corner of the earth. And, with the power of the Holy Spirit within us, and Jesus beside us, that mission is very possible.

← Prayer Needs to Be Wholehearted
Temptation →