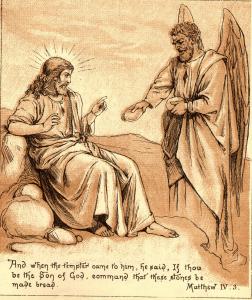 Let no one say when he is tempted, “I am being tempted by God”; for God cannot be tempted by evil, and He Himself does not tempt anyone. (James 1:13 NASB)

What is temptation? According to the dictionary, temptation is the act of tempting someone or the state of being tempted yourself. It can also mean the thing that someone is tempted by. Temptation can be the opportunity to do something that may be good, but to do it in a bad way, a way that is outside of God’s will. For example, eating is a good thing. In fact, food is necessary for life. But if I consider stealing the food that I want to eat, that is temptation.

Where does temptation come from? Is it from God? James 1:13 makes it quite clear that God is not the source of our temptation and warns that, when we face temptation, we should not point to God as its source. Temptation does not come from God. God Himself cannot be tempted and does not tempt us. God may test us, as He tested Abraham when He told him to sacrifice his son, Isaac (Hebrews 11:17). He may allow us to endure trials, to test our faith and our perseverance (James 1:12). But God does not tempt us.

So, if God does not tempt us, then who does? Who or what is the source of our temptation? Sometimes, temptation may come from Satan. He may put something in front of us that seems right, that seems like a good thing to do when, in fact, it is not. The temptation will appeal to our normal desires. Jesus Himself was tempted by Satan in the wilderness before He began His ministry on earth (Matthew 4:1). In the wilderness, Satan knew that Jesus was hungry, and he appealed to Jesus’ desire for food by telling Him to turn stones into bread. Jesus was fully divine, but He was also fully human and experienced the same normal human desires that we have. Was it wrong for Jesus to want to eat? No. But turning stones into bread was outside of God’s will.

Now here’s the thing. Temptation, in and of itself, is not sin. But, when we are tempted to do something that is outside of God’s will, that temptation can ultimately lead to sin. James points out that we are tempted when we get carried away and are enticed by our own lusts, which are normal desires that we seek to satisfy in a way that is outside of the will of God (James 1:14). But, when we let that lustful desire for something deceive us, when we let the seed of lust begin to develop in our hearts, the result is that sin is birthed within us (James 1:15). And, as James goes on to say, we must not allow ourselves to be deceived (James 1:16).

In 1 Corinthians 10:13, Paul points out that all of us will face temptations in our lives. Temptation is common to the human race. But the good thing is, that we have a God who is faithful, and it is because of that faithfulness that He will provide a way out of temptation. As we read in James 1:13, God does not tempt us. He may allow us to be tempted, but not beyond what we are able to deal with. The way out, the way to deal with temptation, is through the Word of God. Jesus demonstrated this when He was tempted by Satan in the wilderness. For each temptation that Satan baited Him with, Jesus responded with the Word of God (Matthew 4:1-11). When we have God’s Word planted firmly in our hearts and minds, we can detect the bait of Satan and deal with it in a way that will keep us within the will of God.